A special tour diary of the important places to visit in Netherlands, ----- Europe's special nation.

(T.C's compilation)
P.S.- Readers are requested to wait patiently for the picture downloads as this is a large file. But it is  worthwhile tour diary)

The Netherlands is a European country of beautiful landscapes and architectural wonders to be seen.
Basic Map Of Netherlands

The Netherlands is a constituent country of the Kingdom of the Netherlands, consisting of twelve provinces in western Europe and three islands in the Caribbean. The European part of the Netherlands borders the North Sea to the north and west, Belgium to the south, and Germany to the east; and shares maritime borders with Belgium, Germany and the United Kingdom. The Netherlands was one of the first countries in the world to have an elected parliament, and is governed as aparliamentary democracy organised as a unitary state. The capital city of the Netherlands, mandated by the constitution, isAmsterdam; however, the seat of government is located in The Hague. The Netherlands in its entirety is often referred to as "Holland", which in strict usage, refers only to North and South Holland, two of its provinces - thus, referring to the Netherlands as Holland is technically incorrect or informal, depending on the context, but is generally accepted when referring to the national football team.
The Netherlands is a geographically low-lying country, with about 20% of its area and 21% of its population located below sea level, and 50% of its land lying less than one metre above sea level. This distinct feature contributes to the country's name: in Dutch (Nederland), English, and many other European languages, its name literally means "Low Land" or "Low Country." De Lage landen (The Low Countries) is a geographical designation of the Benelux, and depending on the context, sometimes extended with parts of northern France (French Flanders, French Hainaut, Artois, Picardy to the Somme) and the formerLuxembourg region around Diedenhoven and West Germany (east Frisia, Julich, Cleves, Bentheim, Lingen, the region around Geldern, around Bitburg, some municipalities east of the eastern provinces which were annexed by Prussia in 1815, etc.). Netherlands has about the same meaning as the Low Countries, but of a more historiographical and political nature. In the fifteenth century the name Netherlands (Nederlanden) came into use. Unlike France and England it had no ethnic origin, but it was originally a geographical term which denoted only the difference with a higher ground. Place names with Nieder are used in various places in the German language area. Also terms like lower Rhine and lower Meuse were commonly used (vs. middle Rhine or upper Rhine). Niderlant was in the late Middle Ages the region between the Meuse and the Rhine, the Lower Rhine Area now be included. The area known as Oberland (High country) was considered to begin approximately at the nearby higher locatedCologne. By extension, the term could also be applied to the delta of the Schelde, Meuse and Rhine, and then would occur in the plural form. Due to the great importance of the Low Countries, the name was increasingly used specifically for this area. From about 1490 the Burgundian-Habsburg provinces thus also were indicated. Besides Flanders, "the Netherlands " was, from the mid- sixteenth century on, probably the most common used name. Most of the areas below sea level are man-made, caused by centuries of extensive and poorly controlled peat extraction that lowered the surface by several metres. Even in flooded areas, peat extraction continued through turf dredging. Beginning in the late 16th century, land reclamation started and large polder areas are now preserved through elaborate drainage systems that include dikes, canals and pumping stations. Nearly 17% of the country's land area is reclaimed from the sea. Much of the Netherlands is formed by the estuary of three important European rivers, which together with their distributaries form the Rhine–Meuse–Scheldt delta. Most of the country is very flat, with the exception of foothills in the far southeast and several low hill ranges in the central parts.
The Netherlands is a founding member of the EU, G-10, NATO, OECD, WTO and a part of the trilateral Benelux economic union. The country is host to the Organisation for the Prohibition of Chemical Weapons and five international courts: thePermanent Court of Arbitration, the International Court of Justice, the International Criminal Tribunal for the Former Yugoslavia, the International Criminal Court and the Special Tribunal for Lebanon. The first four are situated in The Hague, as is the EU's criminal intelligence agency Europol and judicial co-operation agency Eurojust. This has led to the city being dubbed "the world's legal capital". The Netherlands has a market-based mixed economy, ranking 17th of 177 countries according to the Index of Economic Freedom. It had the tenth-highest per capita income in the world in 2011. In May 2011, the Netherlands was ranked as the "happiest" country in the world according to the OECD, reflecting its high standard of living.
The Zuiderzee ( old spelling Zuyderzee) was a shallow bay of the North Sea in the northwest of the Netherlands, extending about 100 km (60 miles) inland and at most 50 km (30 miles) wide, with an overall depth of about 4 to 5 metres (13–16 feet) and a coastline of about 300 km (200 miles). It covered 5,000 sq. km (1,900 sq mi). Its name means "southern sea" in Dutch, indicating that the origin of the name can be found in Friesland to the north of the Zuiderzee (cf. North Sea). In the 20th century the majority of the Zuiderzee was closed off from the North Sea (leaving the mouth of the inlet to become part of the Wadden Sea) and the salt water inlet changed into a fresh water lake called the IJsselmeer (IJssel Lake) after the river that drains into it, and by means of drainage and polders, an area of some 1,500 km2 (580 sq mi) was reclaimed as land. This land eventually became the province of Flevoland, with a population of nearly 400,000 (2011).
The Zuyder Zee wide moat (about 100km in length) that enabled Netherlands reclaim vast lands from the sea 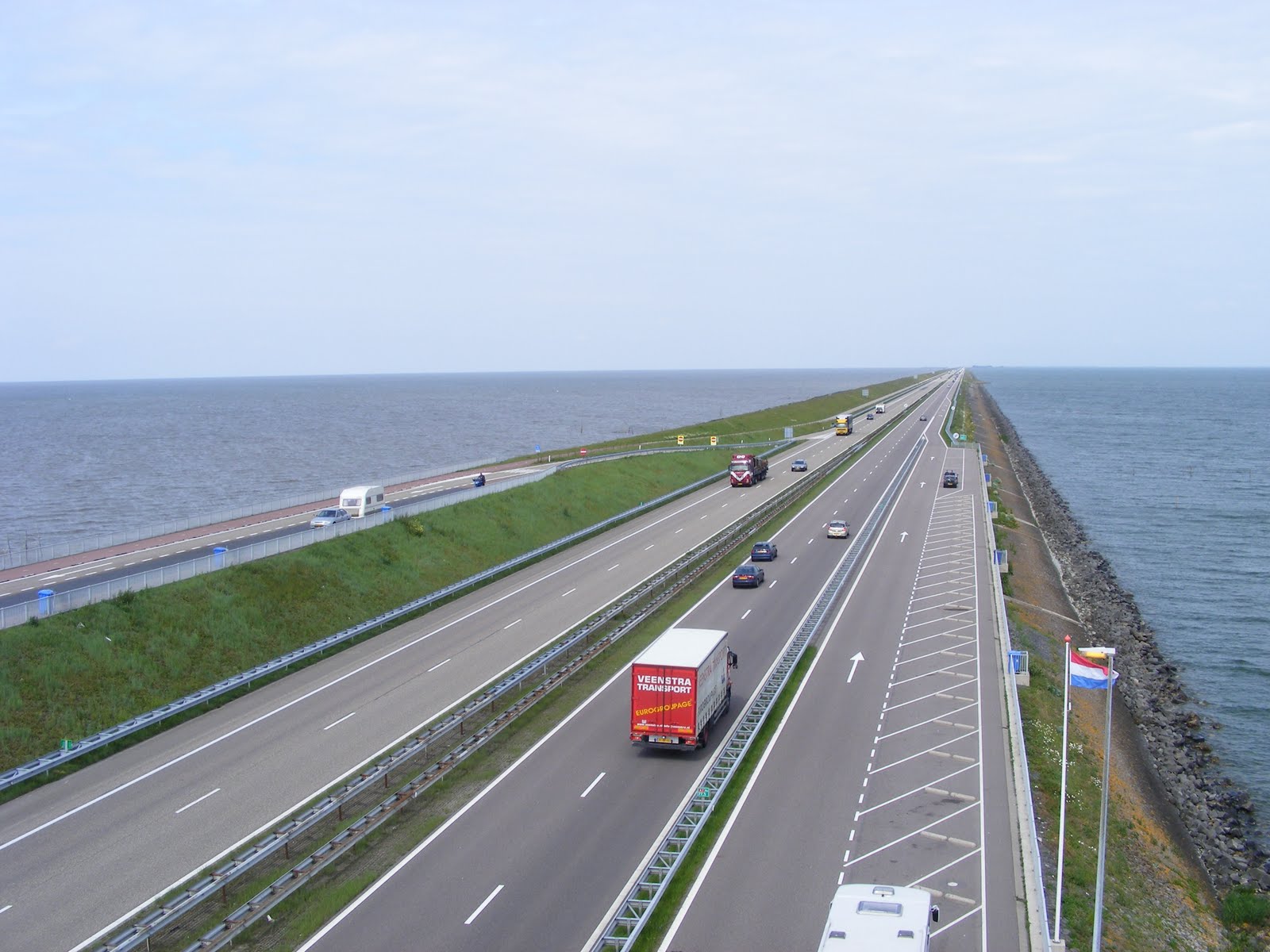 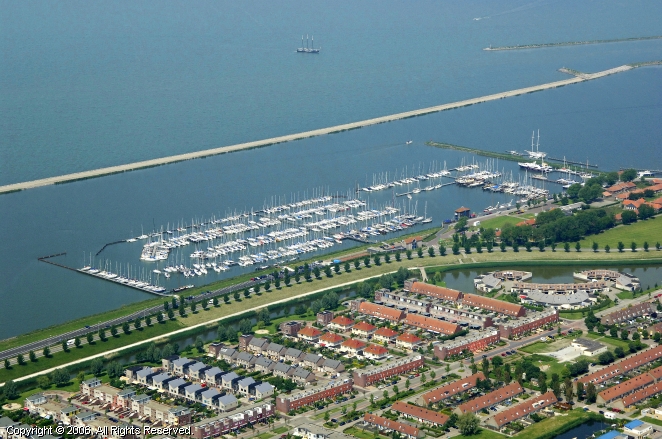 Traditional Giant windmills on the outskirts of Amsterdam

Government Buildings at Koningskade, The Hague in Netherlands

The Dutch Parliament House at The Hague

Madurodam is a miniature park and tourist attraction in the Scheveningen district of The Hague, Netherlands. It is home to a range of perfect 1:25 scale model replicas of famous Dutch castles, public buildings, and large industrial projects as found at various locations in the country. The park was opened in 1952 and has been visited by tens of millions of visitors since that date. In 2012 Madurodam celebrated its 60th anniversary. Kite festival at the  Scheveningen Beach at Hague, Netherlands

The Van Gogh Museum at Amsterdam Barge Cruise through the canals of Amsterdam

The Peace Palace at The Hague. It is often called the seat of international law because it houses the International Court of Justice (which is the principal judicial body of the United Nations), the Permanent Court of Arbitration, the Hague Academy of International Law, and the extensive Peace Palace Library. In addition to hosting these institutions, the Palace is also a regular venue for special events in international policy and law. The Palace officially opened on 28 August 1913. The Heineken Brewery, Amsterdam - The Dutch pride in brewing the best Beer Of The World - "Heineken".

Viola the Funky Apartments of Rotterdam in Netherlands 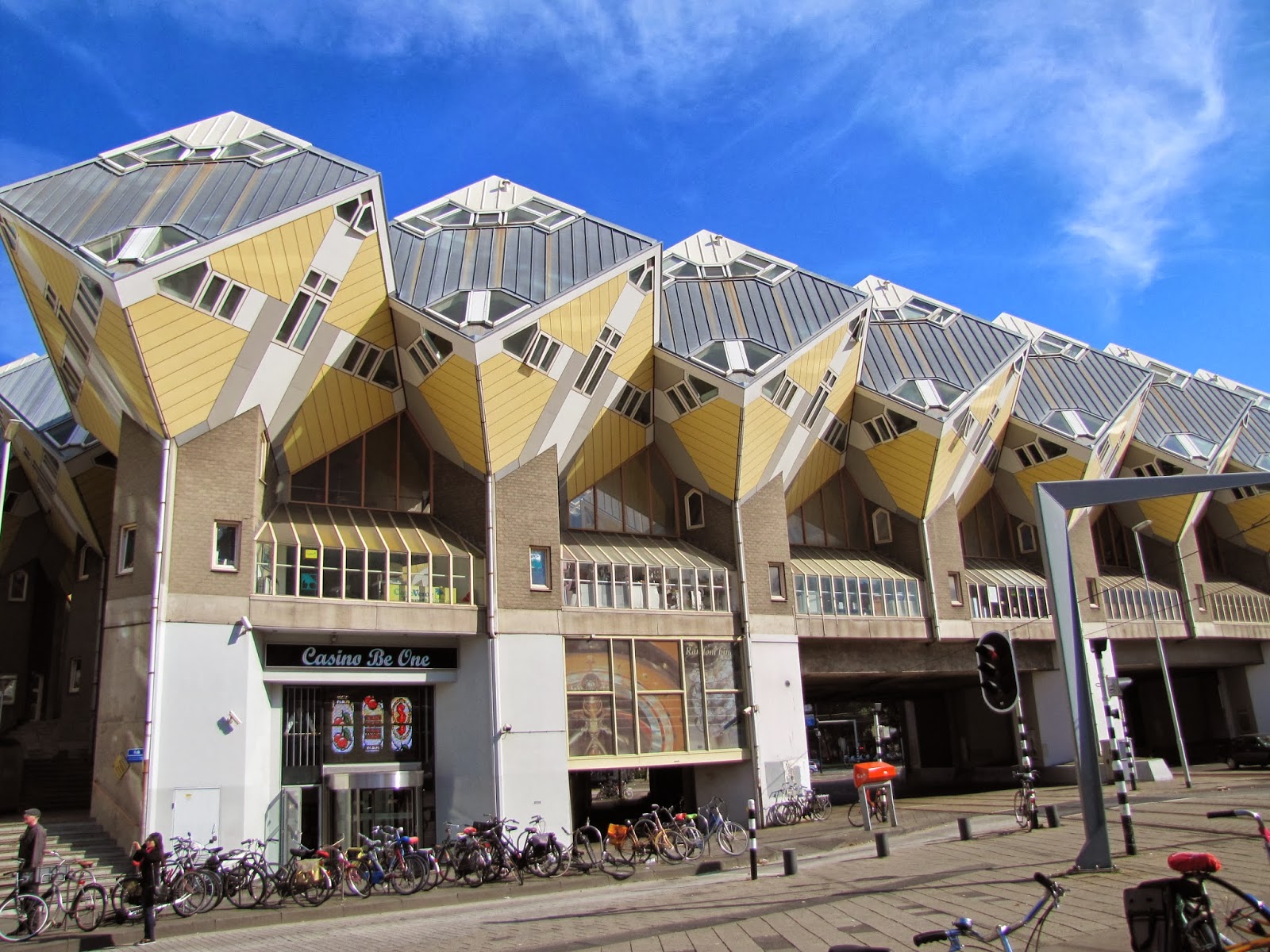 Amazing Market Hall of the buildings designed by MVRDV and  developed by the municipality Provast. It is the new common market commisioned in Rotterdam in urban architecture. The Super Market Mall is  a 3,000sqm retail area, with a 1,600sqm catering area on the ground level and first floor, a 1,800sqm supermarket and an underground car park for 1,100 cars.

The Market Hall is a sustainable combination of food, leisure, living and parking- a fully integrated city center. 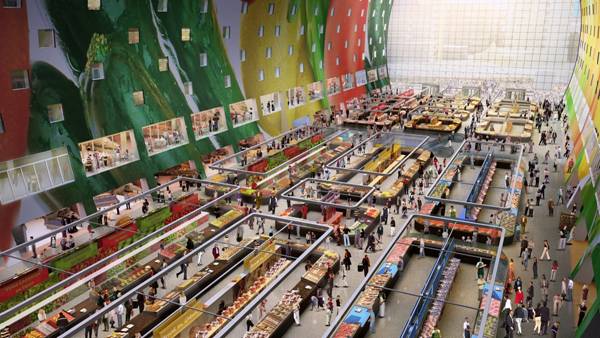 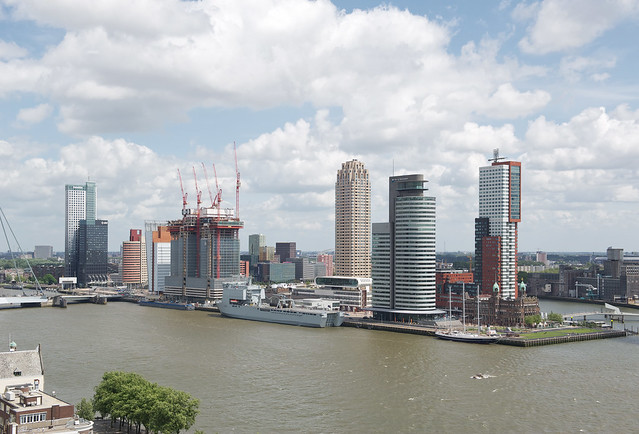 The Keukenhof Garden .
Keukenhof ("Kitchen garden", Dutch , also known as the Garden of Europe), is the world's largest flower garden. It is situated near Lisse, the Netherlands. According to the official website for the Keukenhof Park, approximately 7,000,000 (seven million) flower bulbs are planted annually in the park, which covers an area of 32 hectares. It is a beautiful place. The best time to view the tulips is around mid-April, depending on the weather.

Flowers on Display at Bloemencorso, A Flower Parade in Zundert, Netherlands 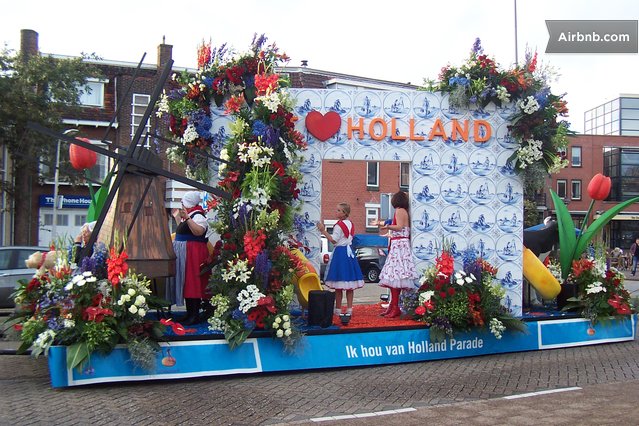 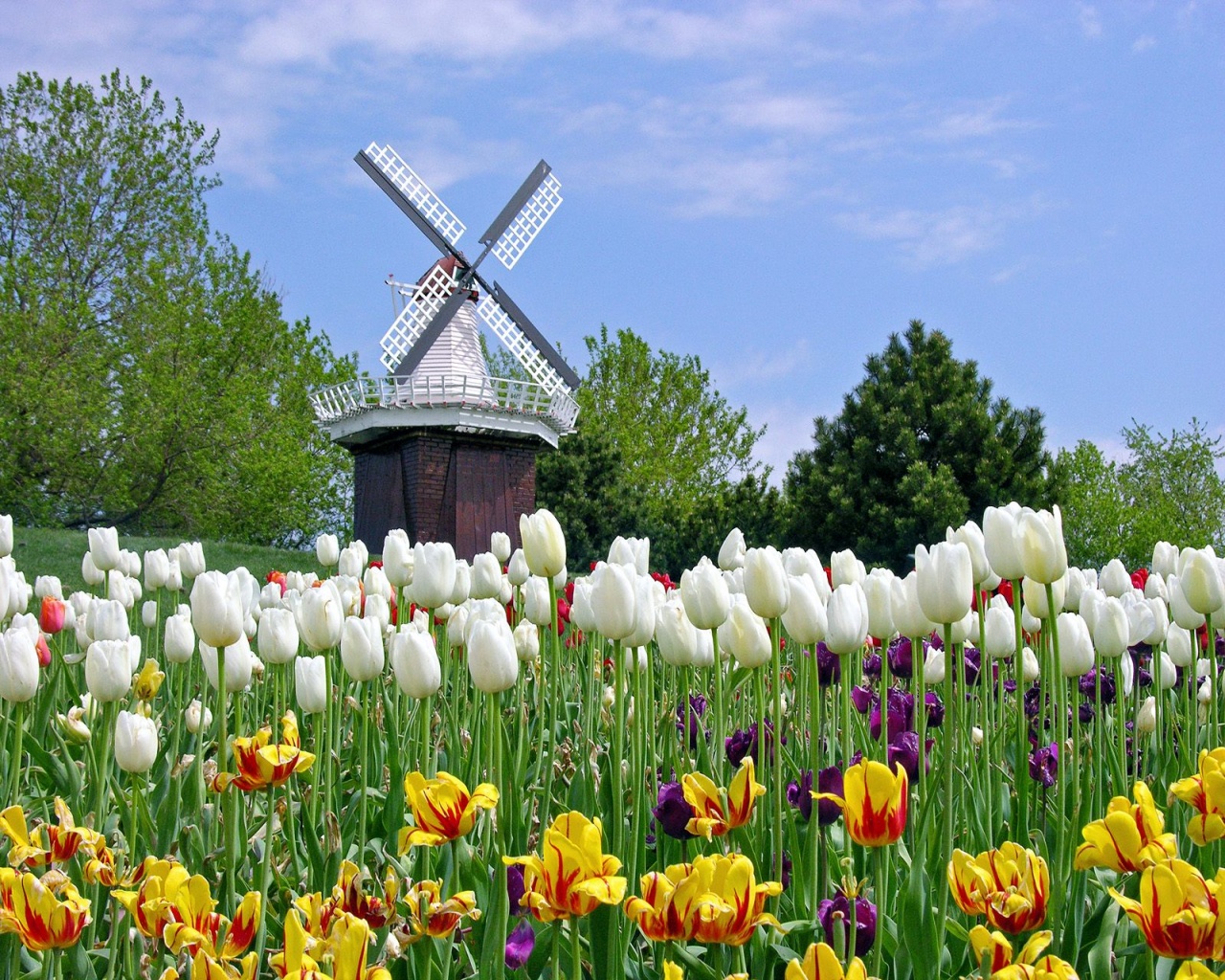 The wonder village town of Giethoorn interconnected only by water canals 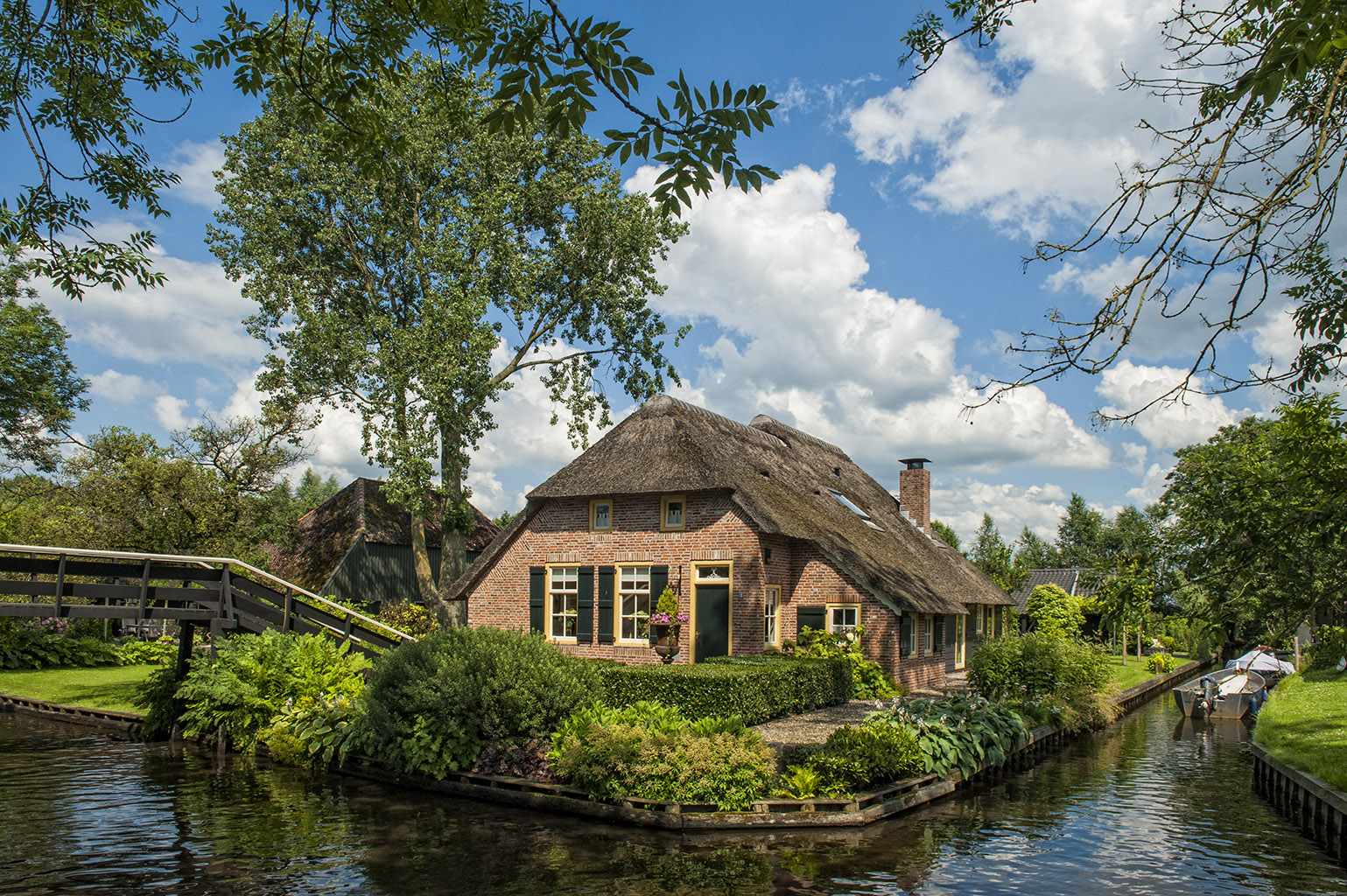 The Hovenring is a suspended bicycle path roundabout in the province of Noord-Brabant in the Netherlands and the first of its kind in the world. It is situated in between the localities of Eindhoven, Veldhoven and Meerhoven which accounts for its name, which is Dutch for "Ring of the 'Hovens'". This was done in order to improve the flow of traffic and improve safety, it was decided to completely separate motorized and bicycle traffic.

Wonderful Architectural Buildings at Utrecht (The Urecht University) in Netherlands. 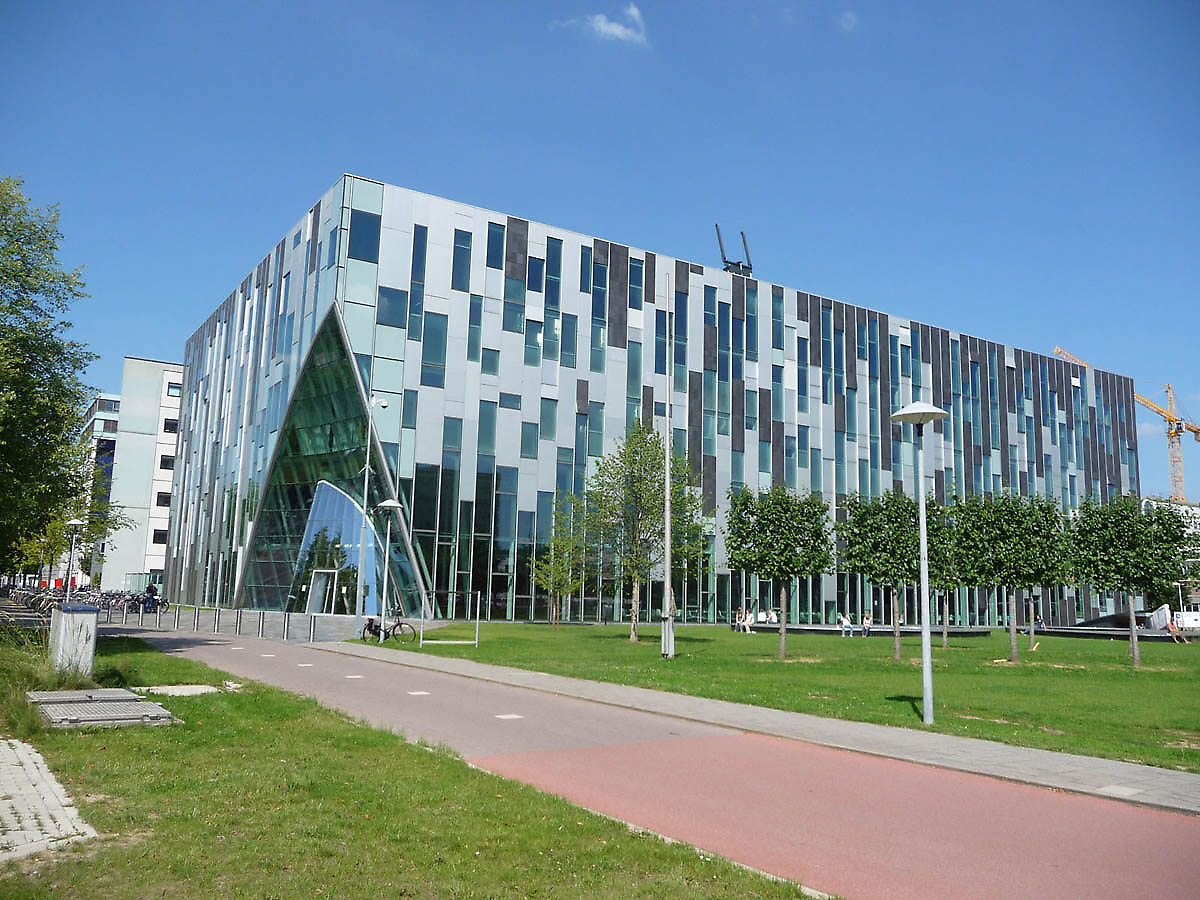 Institute for Sound and Vision at Utrecht 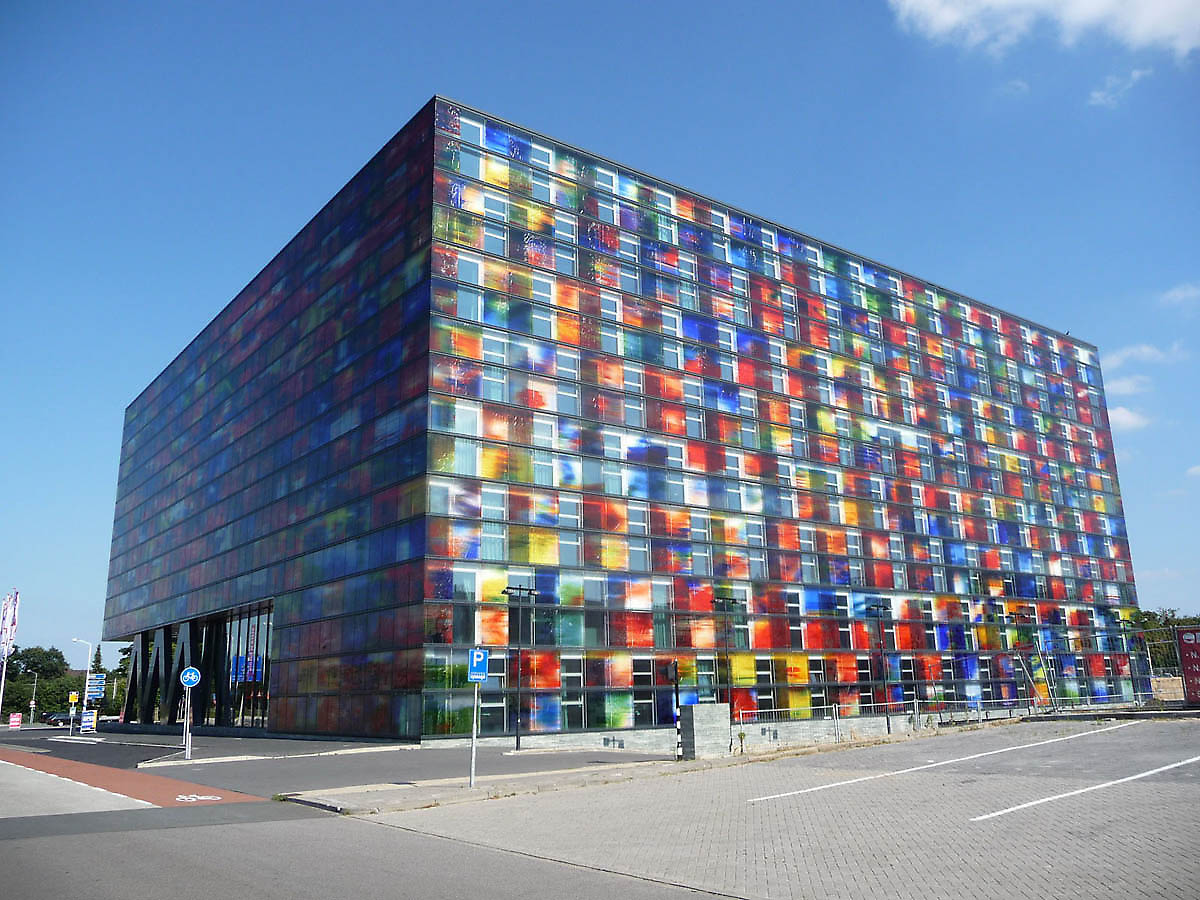 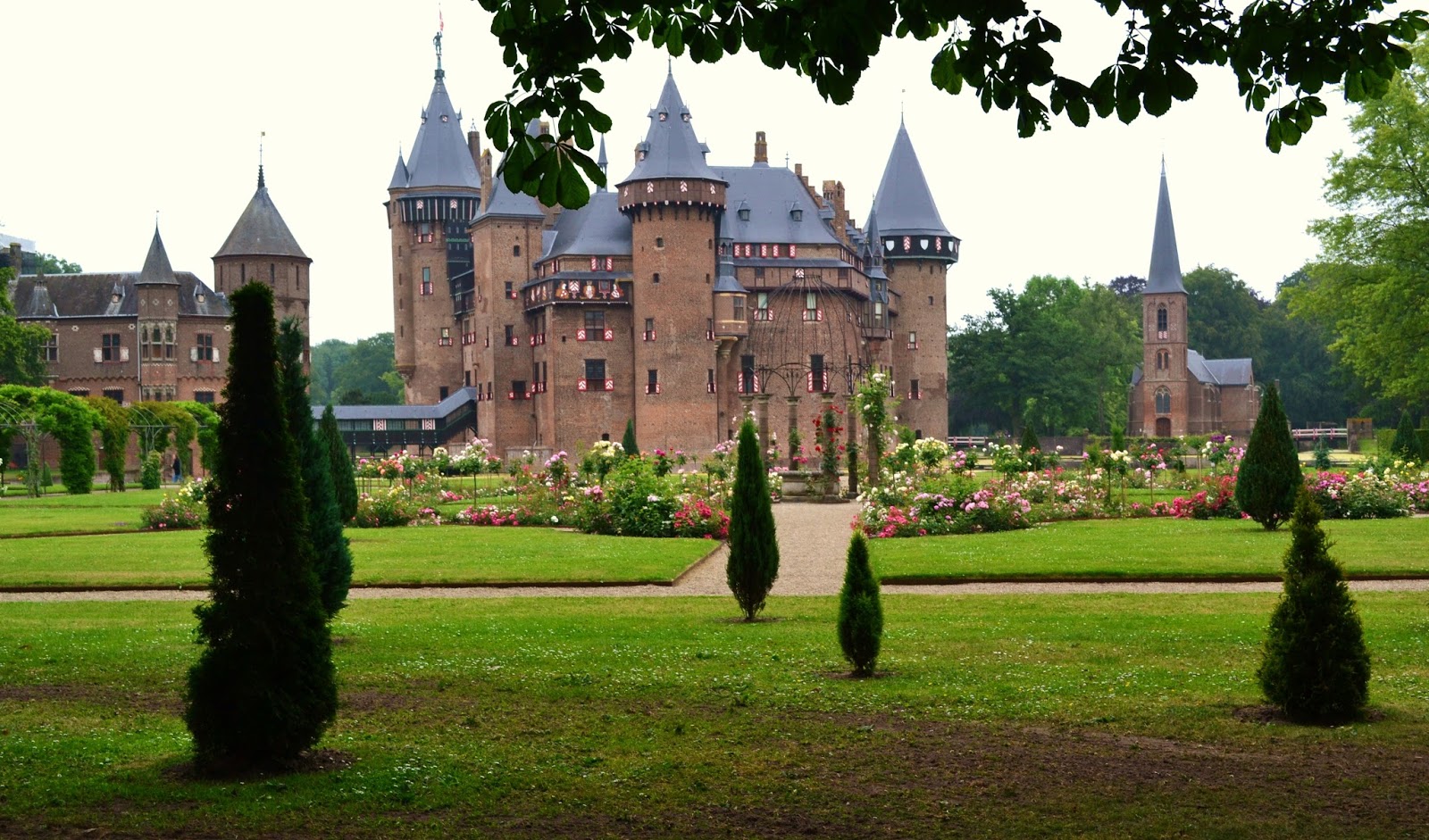 With moats and canal-ways the Dutch have the most natural marina housefronts in the world. This is Oolderhuuske Marina in Limburg. 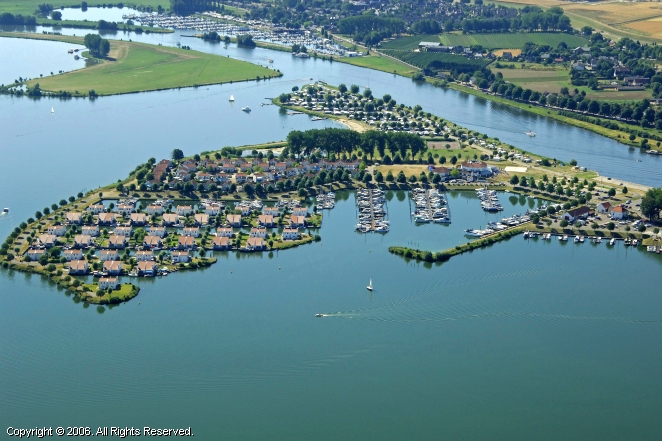 The Zeeland Delta Project of Netherlands for flood control and waterways considered an engineering marvel .

"The Moses Bridge" - Halsteren, The Netherlands.
The bridge, made completely out of waterproof wood, lies like a trench and disappears into the landscape, but from the vantage point of above or either end, the bridge parts the waters, reminiscent of the prophet it is named after. In the case that you are lacking the faith to walk down into and under the water line, the RO&AD architects who designed the bridge assure that flooding would not be an issue. The height of the water is controlled by adjustable dams at both sides of the moat, ensuring that when the water rises, it reaches the dams before the bridge, which also includes a pump just in case the dams overflow.

Mount Saint Peter (Dutch: Sint-Pietersberg), also referred to as Caestert Plateau, is the northern part of a plateau running north to south between the valleys of the river Geer to the west, and the Meuse to the east. It runs from Maastricht in theNetherlands, through Riemst in Belgian Limburg almost to the city of Liège in Belgium, thus defining the topography of this border area between Flanders, Wallonia and the Netherlands. The name of the hill, as well as the nearby village and church ofSint Pieter and the fortress of Sint Pieter, refers to Saint Peter, one of the Twelve Apostles.

De Hoge Veluwe National Park - a stroll through its forest park in autumn. 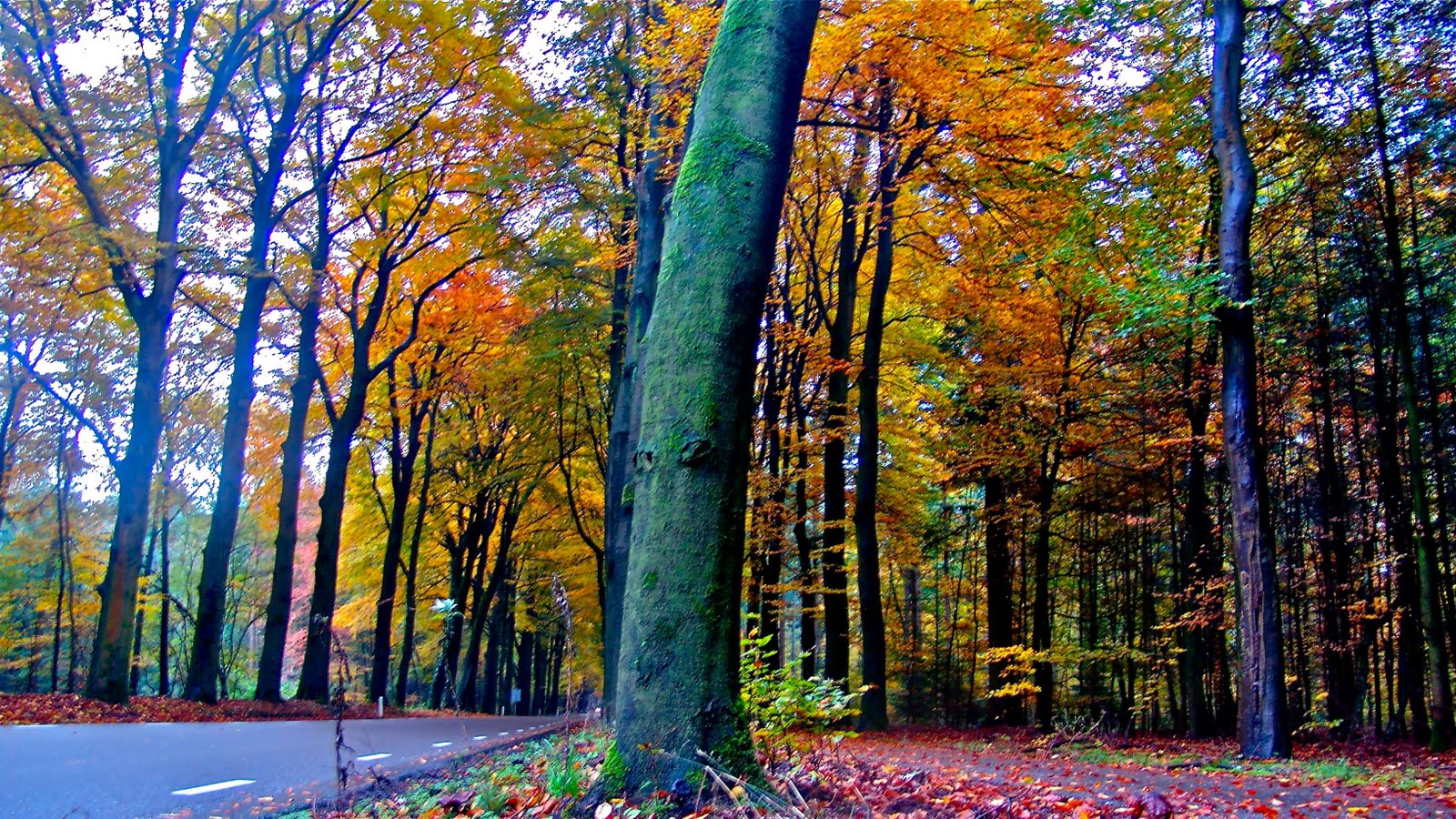 Beautiful Beaches in Curacao, Vacation in Willemstad. - It is an island in the southern Caribbean Sea, off the Venezuelan coast, that forms part of the Dutch Caribbean. The Country of Curaçao (Dutch: Land Curaçao; Papiamento: Pais Kòrsou), which includes the main island and the small, uninhabited island of Klein Curaçao ("Little Curaçao"), is a constituent country of theKingdom of the Netherlands. It has a population of over 150,000 on an area of 444 km (171 sq mi) and its capital isWillemstad. 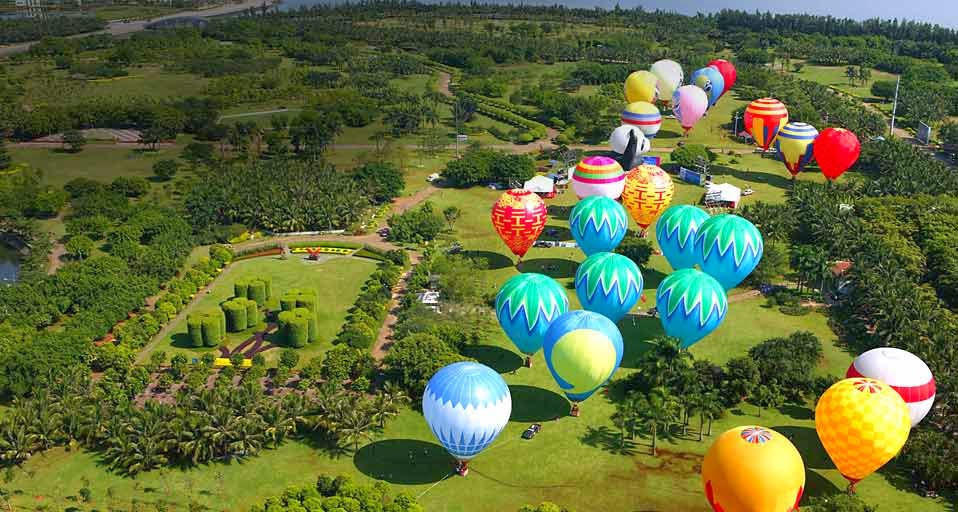 The La Liberte an apartment building at Groningen at Netherlands