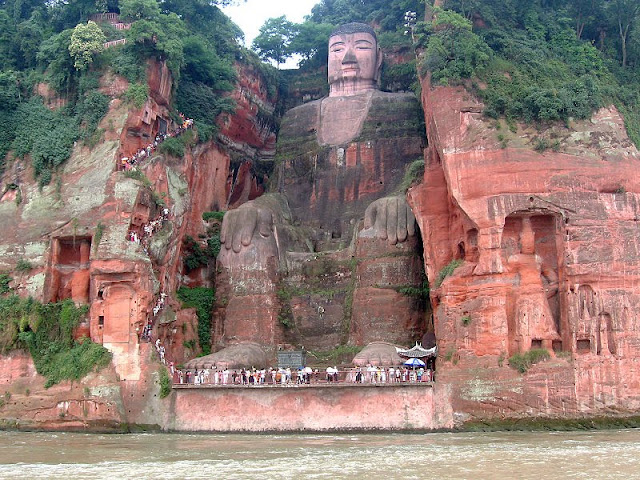 The Buddha is located to the east of Leshan City, Sichuan Province, at the confluence of three rivers, namely, Min River, Qingyi River, and Dadu River. The statue makes itself the most renowned scenic spot in Leshan City. In December, 1996, the location of the Buddha was included by UNESCO on the list of the World Heritage sites.
History of  Leshan Giant Buddha 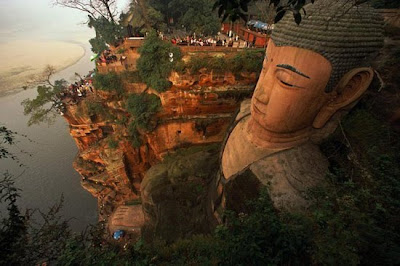 Begun in the year 713 in the Tang Dynasty, and finished in the year 803, the statue took people more than 90 years to carve. During these years, thousands of workers had expended their efforts and wisdom on the project. As the biggest carved stone Buddha in the world, Leshan Giant Buddha is featured in poetry, song and story. Facing the river, the Buddha has symmetrical posture and looks which have been beautifully captured in its solemn stillness. It is 71 meters (about 233 feet) high, and has three-meter-long (about 11 feet) fingers. The eight-meter-long (about 27 feet) instep is big enough for one hundred people to sit on and the 28-meter-wide (about 92 feet) shoulder is large enough to be a basketball playground.
It was a monk called Hai Tong who initiated the project. His concern was for the safety of the long-suffering people who earned their living around the confluence of the three rivers. Tempestuous waters ensured that boat accidents were numerous and the simple people put the disaster down to the presence of a water spirit. So Hai Tong decided to carve a statue beside the river thinking that the Buddha would bring the water spirit under control. Besides, the fallen stones dropped during the carving would reduce the water force there. After 20 years' begging alms, he finally accumulated enough money for the plan. When some local government officials had designs on tempting this amount of money, Hai Tong said that they could get his eyeball but not the money raised for the Buddha. After Hai Tong dug out his eyeball, these officials ran away scared. The project was half done when Hai Tong passed away, and two of his disciples continued the work. After a total of 90 years' hard work, the project was finally completed. 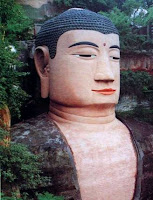 The charm of the Buddha lies not only in its size but also in its architectural artistry. There are 1,021 buns in the Buddha's coiled hair. These have been skillfully embedded in the head. The skill is so wonderful that the 1,021 buns seem integral to the whole. Another architectural highlight is the drainage system. This system is made up of some hidden gutters and channels, scattered on the head and arms, behind the ears and in the clothes. This system, which helps displace rainwater and keep the inner part dry, plays an important part in the protection of the Buddha.
The large pair of ears, each seven meters (about 23 feet) long, is made of wood and is decorated by mud on the surface. For craftsmen of thousands of years ago, it was not easy to fix these to the stone head.
Having such a long history and such worldwide fame, the renovation of the Buddha has received extensive attention both at home and abroad. The Buddha was nearly destroyed by the erosion of wind and rain before 1963 when the Chinese government began the repairing work. At present, the maintenance work is in progress under the instruction of experts from UNESCO.